By Ross DeVol and Jonas Crews

Trade and tariffs with China cause economic hardship on America’s Heartland Economy – counties and crops across the Heartland are affected most.

The impact of China’s recent retaliatory tariff increases on the American Heartland will likely be substantially worse than on the rest of the country. It appears that China surgically targeted these products to place maximum economic and political pressure on the Trump administration. Tariff increases were generally applied to manufactured products and crops, where the bulk of the production is concentrated in the Heartland. The Brookings Institute captured the varied impacts when they looked at the county-level share of employment in tariff-impacted industries and concluded that several of the most exposed counties are in the Midwest and South.1

Unfortunately, the impact on the Heartland will likely be more severe than is indicated based upon employment measures alone. The economic value of crop farming, unlike the value of manufacturing, is not well-described by employment. At least not anymore. In a little over a century, crop farming has gone from mechanical tools propelled by human and animal power to self-driving tractors. From 1900 to 2017, agricultural employment fell from over 11 million people2 to around 2.5 million people,3 while crop acreage was roughly unchanged and crop production increased significantly.4

If employment is not the best measure upon which to estimate the tariff-stricken crops’ local economic impact, what should we use? There are other measures of agricultural output available— but they are too broad; only certain crops have experienced tariff increases. A more precise estimate should be based upon the affected crops’ production value.

Arguably the five most severely affected crops—corn, cotton, rice, soybeans, and wheat—have been subjected to additional 25 percent tariffs by China. These crops are of interest, not only because of their production value in the U.S., but due to the high proportion that China imports. In 2017, Chinese imports of U.S. soybeans equaled 27 percent of U.S. soybean production. The second largest foreign consumer of U.S. soybeans was Mexico, at just three percent.5 China was also the second largest importer of U.S. cotton in 2017, and was a top-10 importer of U.S. corn and wheat.6 It was not until 2017 that an agreement started the process to allow U.S. farmers to export rice to China for the first time, but the U.S. has been expected to play a major role in supplying China with the grain when trade begins. The need to find alternative markets for would-be exports to China have already pushed commodity prices lower and will, therefore, harm farm incomes for all U.S. farmers of these crops, not just the farmers whose crops were bound for China. 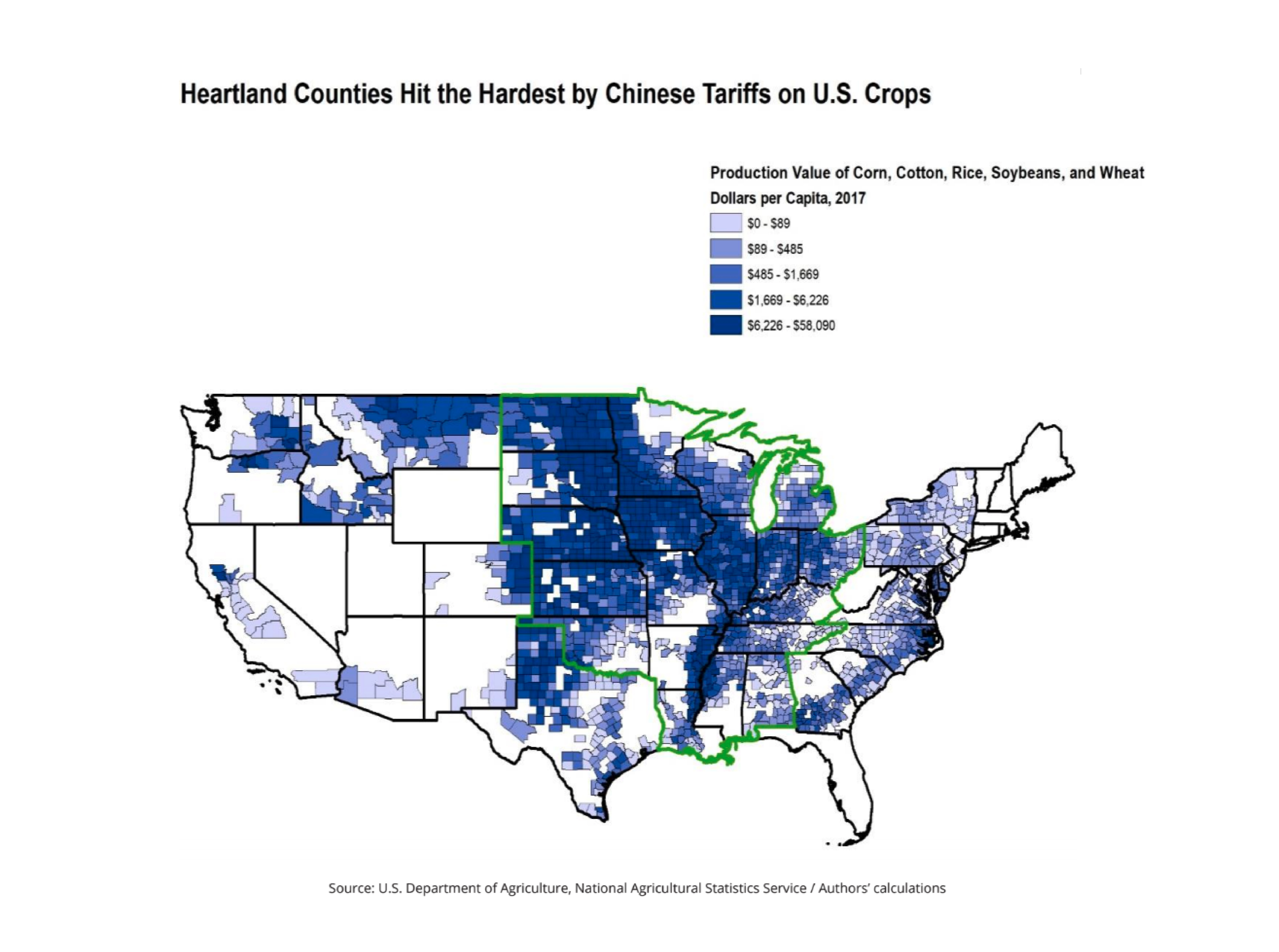 Steele County is not alone in its degree of exposure. Some of the lowest-income per capita counties in the nation are along the Mississippi Delta (from Tennessee through Louisiana), and the vast majority of Delta counties were in the top 20 percent by per-capita production value. Issaquena County, Mississippi, is a stark example, with 2016 production of the five crops valued at 135 percent of total personal income.8, 9

China clearly chose strategically to target these crops for retaliatory tariffs to impart the greatest economic damages to President Trump’s base of supporters. The ultimate objective being to affect his political and electoral prospects in an effort to eventually pressure the president to seek a negotiated settlement on trade and American intellectual property disputes closer to Chinese preferences. One of President Trump’s responses was $12 billion in monetary aid to affected farmers for this crop year, but, as pointed out by crop farmers across the country, the aid is a one-year bandage on a multi-year problem. With the recent announcements of additional tariffs by both parties,10 we may even need a bigger bandage.

China’s tariff increases on U.S. crops will be felt in the Heartland to a higher degree than anywhere else. An additional 25 percent tariff may not seem like much in comparison to some tariffs across the world. Yet, for places like Steele County and the Mississippi Delta, which rely so heavily on these five crops, and, therefore, on their export to China, it could prove to be devastating to their economic prospects, which are just beginning to improve. The White House may have given itself a year to negotiate those tariffs away before any devastation ensues, but it is going to be a tense 12 months in the middle of America.